See how others do it!

Read about the Manobo peoples’ experience in documenting their Pangasananan (ICCA) in the Philippines, working with local and international allies and using a variety of participatory methods and technical tools.

Documenting and mapping the Pangasananan of the Manobo People of Bislig (Mindanao, the Philippines)

Prepared by Glaiza Tabanao, the Philippines

Pangasananan is the name of the territory of life of the Manobo people, situated in the north-east of Mindanao island, Bislig City, the Philippines. The name originates from the Manobo word pangasan (i.e., the act of obtaining food and materials to meet certain needs, such as timber, ritual materials, decorations, materials for household use, etc.) and anan, a suffix denoting a place. Originally much bigger, the Pangasananan was overlapped by a huge timber concession for pulp and paper, which decimated the original forest.  It now covers just 70 km2, but it remains the source of everything the Manobo need— food, shelter, medicines, water, recreational and spiritual space, and livelihoods for about 1,500 men and women. For the Manobo people, the destruction of the Pangasananan would mean their own downfall, the obliteration of their identity and an utter disrespect of their ancestors. Hence, it is of prime importance for them to govern, manage and conserve the Pangasananan for their community to thrive through generations.

When this drive to survive and thrive was threatened by large-scale logging operations, uncontrolled entry of migrants, and expansion of commercial agricultural areas in their territory, the Manobo youth of the early 1990s decided to fight back and explore means to stop the destruction and secure what remained of their Pangasananan.

Early on in that process, the Manobo recognized that it would be difficult to continue without allies. Hence, they forged partnerships with a local church group, different armed groups, some migrant settlers, and non-governmental organizations.  As the logging company threatened them with guns, they naturally sought guns to defend themselves and their territory. From their new partners they were seeking advice, financial support and the new knowledge and skills they needed to win the fight. They obtained all that. For instance, in 2004 they became aware of a relatively new law called the Indigenous Peoples’ Rights Act (IPRA), which would allow them to obtain a Certificate of Ancestral Domain Title (CADT) and legalize ownership of their territory. However, to obtain a CADT, a lot of information needed to be gathered, validated, and packaged as proof of their ownership of the territory. This became the impetus for information-gathering, documentation, and mapping activities.

Documentation activities became intensive and were fast-tracked when the community got to work with an NGO called the Philippine Association for Intercultural Development (PAFID), Inc. in 2009. Through PAFID, the Manobo also became acquainted with the ICCA Consortium the following year. It was at that time that the Manobo realized that, while seeking to secure the governance of their territory, they were also contributing to the global fight to save the natural environment. They became aware that they had been living of, cradling, protecting, conserving, and fighting for what others call an ICCA or ‘territory of life’, but that they had always known as their Pangasananan. Aside from being a source of empowerment, they saw this realisation as an opportunity to find more allies in protecting their territory, improving conservation initiatives, nurturing traditional practices, gathering more knowledge and skills, strengthening their claims, and improving their living conditions. Hence, the community decided to document their ICCA and submit it to be included in the International ICCA Registry. In 2017, their legal claim over the Pangasananan was given a boost by its inclusion in a national ICCA project that provided resources for their documentation work. The project was supported by the UN Global Environment Facility (GEF) and the Philippine Government through the Biodiversity Management Bureau (BMB-DENR) and NCIP (National Commission on Indigenous Peoples).

What information was gathered?

For their CADT application, the community documented and gathered the following information, with support from PAFID:

Initially done to satisfy government requirements for the recognition of their ancestral domain and to develop an Ancestral Domain Sustainable Development and Protection Plan (ADSDPP), this information proved useful for the documentation and registration of their ICCA and the consequent crafting of a Community Conservation Plan (CCP). Information was also gathered about their forest carbon stock, conservation activities, traditional knowledge and practices contributing to nature conservation, updated land uses, hazard-prone areas, and ecological significance and biodiversity values of the Pangasananan.

How was the information collected?

These are the steps we took:

1. Free, prior and informed consent

The FPIC document provided by the international ICCA Registry was translated into the local language and discussed with an initial group of leaders and members of the community. Each part of the document was explained and discussed, together with information on the benefits, advantages and limitations of uploading data to the ICCA International Registry and issues of data ownership, etc. In the end, the community decided that the benefits of inscription of their territory of life were more important than the limitations and risks also implied.

Community Research Associates (CRAs) were identified by community elders and leaders. They were then provided an orientation on the goals and objectives of the research as well as various methods of research and spatial data generation using participatory mapping methods. Finally, they were trained in the conduct of participatory natural resource appraisal.

Participatory research was accomplished through primary and secondary methods, including direct observation, key informant interviews, focus group discussions, and review of existing literature, documentation, and research. These were conducted in both formal and informal settings, whichever was applicable. Informants were identified during the leaders’ and elders’ meetings and interviews. The research team also developed a checklist of existing, relevant documents from the community, the internet, government, and academia, as well as from prior databanks of PAFID.

Major research topics included the history of the Manobo; traditional and current livelihood activities and schedules; spiritual belief systems; rituals; management and use of natural resources; traditional and contemporary governance systems and structures; and history, location, description and stories about the Pangasananan. Also discussed were the threats to the territory of life and the Manobo people as its custodian. Finally, information was gathered about traditional arts, crafts, music, traditional healing practices; spirit myths; the history of culturally important places; important plants and their uses; and rituals (descriptions, materials used, and why were they used). 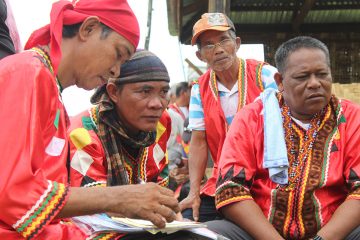 Assisted by a PAFID technical team, GPS-trained members of the community conducted a field-based perimeter survey to delineate the Pangasananan. They took a perimeter walk to mark off the natural boundary lines and cultural markers of the domain. They also took point positions of important geographical features inside the domain. These included the location of barangay sitios (municipality buildings), schools, health centers, markets, bridges, concrete and rough roads, and rivers and streams. All the data gathered were overlaid on a topographic map. This was then used as the base map for determining the extent of the domain.

In 2009, a 3-D map with a scale of 1:10,000 had already been prepared by the community with the help of PAFID. In community workshops, PAFID technical staff had facilitated sketch mapping activities to enable the community to identify the limits of the Pangasananan and determine its full coverage. Community participants recalled and wrote the names of mountains, rivers, sacred areas, and old villages in the indigenous language and provided historical accounts of these. They identified important landmarks such as burial sites, caves, lakes, community boundaries, protected forests, and others. These sketch maps provided the basis for preparing larger topographic and base maps that were used to construct a relief model of their domain: a 3-D map! 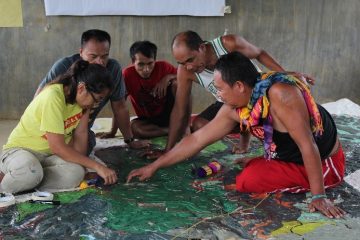 Made mainly from overlapping rubber sheets, resin, and paint, the 3-D map offered a full view of the natural boundaries of the territory and detailed physical characteristics of the mountains and bodies of water. The elders described the current utilization of land and identified through pushpins, strings and paint the locations of sacred grounds, hunting areas, old dwelling sites, etc. inside the ancestral domain map. The information from the group was then consolidated and validated to ensure that the map was both accurate and user-friendly.

Data from the 3-D map was then digitized using computer software (Quantum GIS version 2.14.0 and ArcGIS version 10.1). Digitized copies of spatial information about the ancestral domain/ ICCA/ territory of life (the three were confirmed as synonymous for the community) were deposited into a GIS database and used in the production of several maps with different themes. Processing and production of various thematic maps was accomplished by PAFID’s GIS specialist. A total of 23 thematic maps were generated from the participatory map processing and through the GIS data obtained from the government, NGO partners, and online open-source GIS platforms such as Google Maps and OpenStreet Map. These maps are listed below:

The precise and user-friendly maps merged local people’s knowledge and spatial data through GIS technology to serve as a powerful medium for better communication and analysis. These maps were useful in better understanding and describing the local situations, the location of hazards, the areas in need of reforestation and the forests in need of rehabilitation. The community also realized the importance of their ICCA—territory of life as a water source for Bislig and as a cradle of biodiversity. The community could then use this information to craft their proposed land uses, activities and policies.

[1] Bislig is a town in Mindanao close to the ancestral domain of the Manobo and famous for birdwatching.

A Participatory Appraisal was done to determine the situation and conditions of natural resources in the ancestral domain. The resource inventory assessed carbon stock in trees as well as floral biodiversity in forests within the Pangasananan.

The faunal survey relied on anecdotal observations from the locals. Free-listing of names and uses of plants and animals observed by community were also done. Pictures of known birds and snakes were shown to community members to determine which ones were commonly sighted in the Pangasananan.

Information was also gathered on the floral type, location/habitat and service/value that the Traditional Indicator Species (floral species identified by the community as indicative of the health of their forest) provide to the tribe and its environment. The Manobo’s definition of a forest and the presence/absence of traditional indicator species were then used as basis to assess the indicative health of the inventoried forests.

The establishment of transect lines and assessment of biodiversity using internationally-used indexes, together with the identification of traditional indicator species, show how scientific and traditional methods can blend into simple techniques that the community understands, appreciates and can ultimately use to strengthen the governance of their territory of life. 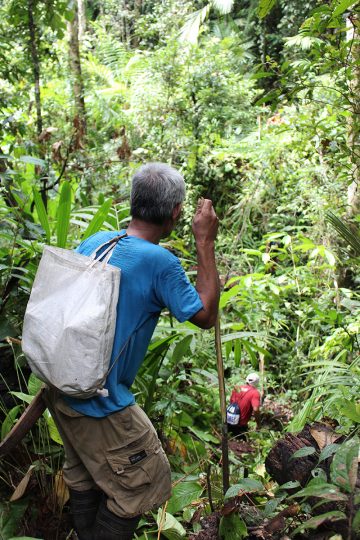